I tripped over this phrase in an article by Mike Fleming Jr. on the Yahoo television news site.   Mr. Fleming's article is about why the Today show dropped an interview with actress Amy Adams.

This is the first time I've ever seen a film title used as a common noun.  When I read this I wondered if the great Kurasowa's movie title was becoming genericized like Kleenex and Xerox,  each word often used for any kind of tissue or photocopying.  We are currently taught to capitalize both of those trade names but what about past proper names like Draconian (named after a tough-minded Greek law maker named Draco), aspirin (a name trademarked by Bayer), or frisbee (trademarked by Wham-O)?  Over time certain proper nouns have the rough nub of their capitalization rubbed off through overuse.  (For an interesting discussion of the question Boolean or boolean and other common/proper confusions you should check out the English Language and Usage Stack Exchange.)

I had not realized that this downgrading to the common had become true of Rashomon, one of the most powerful films ever made.  (Bad print available for free download from Internet Archives.)  But in my morning's Googling (or should that be googling?) I found a reference to lower case "rashomonism."  In 2002 Oregon Film reviewer D. K. Holm wrote in his review of the Criterion Collection re-release of Rashomon on DVD: 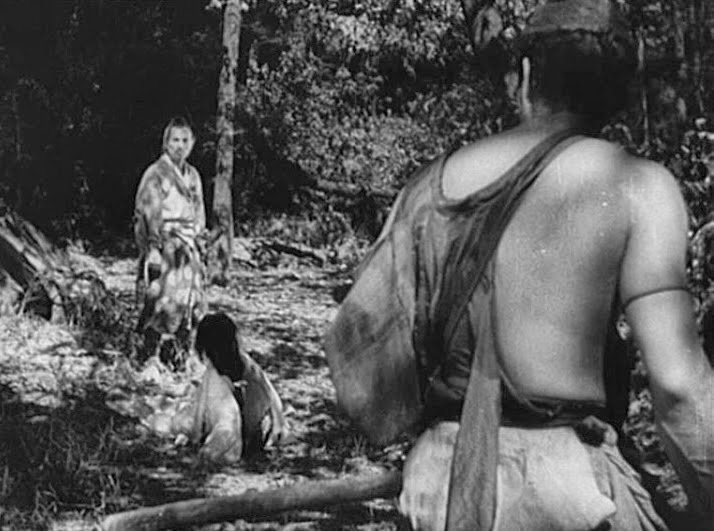 "Rashomon — and, as it were, rashomonism — is now so embedded in the filmic culture that it's hard to imagine how much a revelation the film was when it was released in the west in 1951, after it won a prize at the Venice Film Festival and before it went on to win an Oscar for Best Foreign Film."

The core concept of the film -- the multiperspectival aspect of shared memory - has lead folks at the University of California to create a socially conscious site named for the film:  The Rashomon Project:  An open source tool-kit for assembling and analyzing multi-perspective video timelines.

Which all leaves me to wonder what other films titles will become common nouns?  They will have to be one word titles, of course.  Will people ever come to say, "I was casablancaed on that one" to mean, "I wasn't surprised" or "we have a shared past that we'll always remember?  No, I think not.  We shall instead say, "I was shocked, SHOCKED" or "We'll always have Paris."

Are there any other film titles that could lose their proper noun status? If you can think of any, let me know!

This opening post will serve as something of an invocation as it deals with a rhetorical figure found unexpectedly in a religious text.  I began the first summer of my retirement by re-reading the Gospels and discovered that a story-telling technique thought by many to be little over one hundred years old actually has at least one ancient root.

As a former film teacher, I probably have the ethos to just fling out my definition of cross-cutting.  But seeing as how you might want the reassurance of legit sources, I'll link you to the Film Language Glossary at the Columbia Center for New Media Teaching and Learning (CCNMTL), "Parallel editing is a technique whereby cutting occurs between two or more related actions occurring at the same time in two separate locations or different points in time. D. W. Griffith is often cited for his use of this technique."

So how is a film-editing technique a rhetorical figure?  Or, perhaps more appropriately, what is a rhetorical device if it isn't a "figure of speech"?

According to Aristotle, "Rhetoric may be defined as the faculty of observing in any given case the available means of persuasion." (Book I: 2, Roberts)  Anything that can represent something else to somebody, in other words, anything that is a sign, may be used rhetorically.  So photographs and film strips are signs that may have a persuasive meaning, as are the ways in which they are organized.

Almost since cinema's birth, both filmmakers and film theorists have recognized the persuasive value of image juxtaposition.  The great Russian thinking directors Eisenstein, Vertov and Kulshov wrote about the power and importance of editing in guiding the thoughts of the viewer.   When I was an undergraduate I used these Soviet theoreticians in a long and execrably written paper about the ways in which the work of Charles Dickens, specifically the novel Little Dorrit, presaged many of the narrative techniques of cinema.  More important writers than I have recognized similarities between literary and cinematic conventions.  In From Plato to Lumière: Narration and Monstration in Literature and Cinema, André Gaudreault notes that in literature parallel editing may sometimes be recognized by the linguistic formulation, "Somewhere else, . . . also . . . " as in "A girl was playing happily with her family while somewhere else there was also a girl who was sitting unhappily."  Thus he recognized that literature also had a method of placing scenes illustrating different settings together to achieve an effect.  Thus, parallel editing existed in literature before it appeared on the screen, in spite of the claims of experts such as David Bordwell that the technique was born with the art of the moving picture.


Nevertheless, I was surprised to find this technique in the New Testament.  Most of the stories in the Gospels are written in a linear fashion, with one scene set in one place following the next.  But I found a situation in which parallel editing occurred in one but not all four of the Gospels.  And I think that the structure helps deliver an important message.

The scene occurs after Jesus has been arrested.  He is questioned and then spit on and beaten by the "scribes and elders" who are gathered with either Caiaphas himself or his father-in-law.  As the inquisition proceeds within a chamber, the apostle Peter is outside warming himself outside by a fire.   He is recognized and accused of being one of the people following Jesus.  The night before Jesus had warned Peter that he would deny his Rabbi three times before the cock's crow.  Peter had argued fiercely against this accusation.  But here at the fire among servants and officials,  he winds up disavowing Jesus three times before morning light.

Three of the Evangelists write about these two scenes in separate sections of their chapters, using one section for the questioning within the house and another for the betrayal at the fireside:  Matthew, 26:57-74, Mark, 14: 53-72, and Luke, 22: 54-71.

But the Evangelist John uses cross-cutting.  First, Jesus is arrested and taken to Annas, the father-in-law of Caiaphus (18: 12-14).  Then we cross-cut to Peter in the yard, standing around the fire warming himself.  Here, after being recognized by a female servant, he denies Jesus for the first time (18: 15-18).  "Meanwhile," as the NIV translation has it, back inside, Annas and others are questioning and slapping Jesus, then deciding to send him on to Caiaphas. (18: 19-24).  At the conclusion of that scene, we cut back to the yard where more people question Peter (including a relative of the man whose ear he cut off during the brief fight at Gethsemane) and he denies Jesus two more times before the rooster cries (18: 18-27).  In the chapter's final scene we're back with Jesus as He's being taken by the elders to Pontius Pilate (18: 28-40).
What does this parallel editing do that the more linear structure doesn't?  Well, if the story were not so well known it might be argued that it creates a brief moment of suspense as we wait to see if Peter is really going to deny Jesus two more times before morning light.   But I think that this rhetorical device is used, instead, to forge a more complex response in the reader to Peter's decisions.  The first time we see Peter in the yard we dislike him for the denial -- how dare he betray his Lord?!  But after witnessing the pain and humiliation of the interrogation, we return to a man whose fear seems more understandable.  Thus, the Gospel of John can deepen our understanding of Peter's "failed" interior struggle between fear and love.

Jesus said that he would build his church on a "rock" "Thou art Peter (Πέτρος, Petrus), and upon this rock (πέτρα, petra) I will build my Church."   Although each of the four Gospels reveals a rock that crumbles, it is John who takes us into the parallel scenes so that we may experience the contest between love and fear with greater understanding.  And, in doing so, his cinematic narrative device has the potential to enlarge our compassion for ourselves as we too meet those moments which ask us to choose between safety and those dangers that sometimes accompany our love for God and His creation.